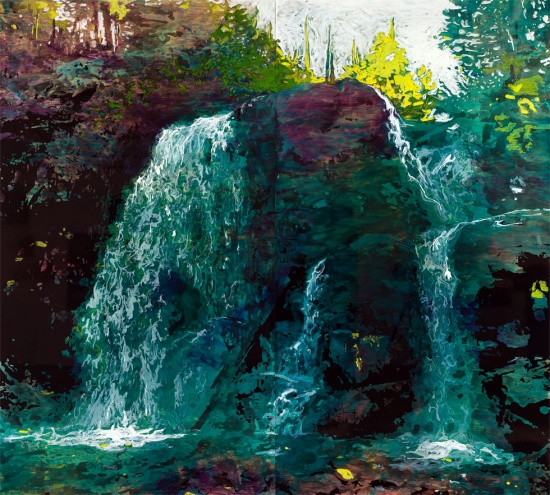 ANGELL GALLERY is pleased to present North Swallow, an exhibition of new works by gallery artist Steve Driscoll. The exhibition will be in the west gallery from December 8 to January 12, 2013. An opening reception will be held on December 15, 1:00 to 4:00 PM.

Steve Driscoll is rapidly becoming one of Canada’s foremost contemporary landscape painters. Since graduating from OCAD ten years ago with a medal in painting and drawing, Driscoll has continually challenged the boundaries of this most iconic of Canadian subject matter, developing an expressionistic approach that captures the spirit of place with fresh vision.

Monumental in scale, Driscoll’s dashing paintings, with their psychedelic palette and unconventional technique (poured urethane on board) are firmly planted in contemporary ground, yet have deep roots in the venerable North American landscape painting tradition.

The title of Driscoll’s new body of work, Northern Swallow, refers to the series’ origins in an extended road trip that took him through 26 states. “I was collecting places, images and landscapes,” says Driscoll. “Each new place carried with it new colours, textures and space.”

Back in Canada, Driscoll was inspired by his travels to look afresh at the landscape of Ontario. Like the Group of Seven, he is drawn to the wild vigour of Lake Superior’s untamed northern shore. Yet in his paintings Driscoll goes far beyond a literal translation of what he’s seen.

“Some of the Ontario trees are built with Utah rock and cast in a California light or filled with a Louisiana sky,” says Driscoll. “Although this may sound fractured I feel it has helped me steal these moments from my experience, in space, both physically and emotionally. Fusing vision and memory, Driscoll creates vivid, light-infused evocations of the natural world that transcend the limits of time and space.

Steve Driscoll is Toronto-based painter who has had nine solo exhibitions and has been in numerous group shows in Canada and the U.S. His work has been featured in Canadian Art, dART International, The Telegram (NL), NOW Magazine, CBC TV and in the book, Steve Driscoll: In Conversations, published in 2008, and the most recent publication in 2012, Steve Driscoll: Intelligence with the earth. In 2010, Driscoll was the subject of a documentary on ArtSync TV.